For some reason I was really into Halloween this year. Which is weird. I mean, I’m not anti-Halloween, it’s just never the first holiday that I worry about celebrating. I went to a costume party for the first time in I don’t even know how long (probably college), I even made fun themed snacks that involved me dying my food green and drawing faces on the cups… 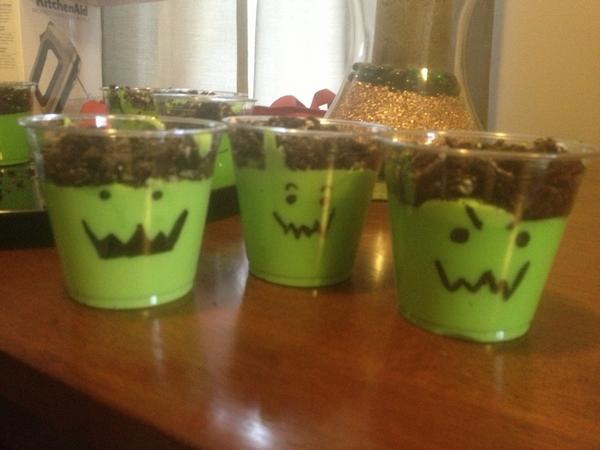 But more than anything, I was SOOO excited for my first trick or treat as a homeowner! Sandy tried to ruin it a bit, but it was still a success. I had a lot of kids stop by! I invited some friends over and we ate chili and cider while we passed out candy…it was a great, fall night. Also, the cider I made was suh-weet. So of course…here is the recipe…

5-6 whole cinnamon sticks
1 whole orange, cut into wedges with the peel
1/2 c. brown sugar
2 tsp. whole allspice
3 tsp. whole cloves
1/2 gallon+ apple cider (I bought a gallon and filled my crock pot as full as possible; I added the leftover and continued cooking once we had consumed some)

Throw it all in the crock. Let it cook on low for a few hours (or about 8 like I did…) Your house will smell amazing! And the warm goodness will be like fall in a cup. Make sure you strain it to remove all the spices before you serve. We had rum on the side as well for those who wanted to add it…a little extra warmth is never a bad thing 🙂

I wish you could smell this through your computer…heavenly.

How did you celebrate Halloween?